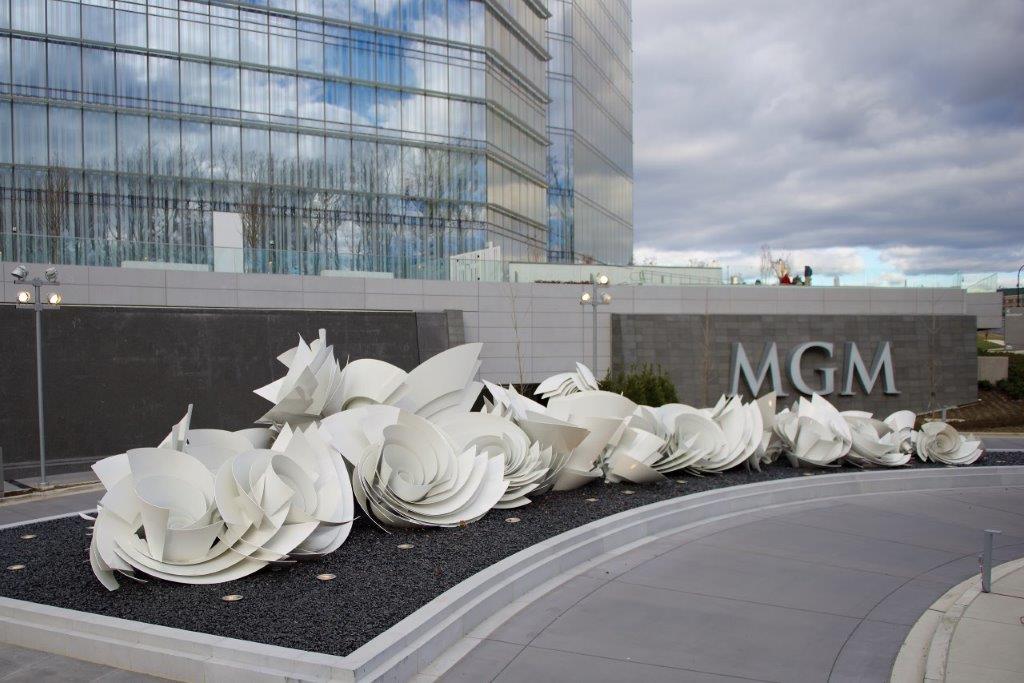 The opening of the resort complex MGM National Harbor in Oxon Hill, Maryland, is an occasion to be noted and celebrated beyond the borders of the city and state. It is the latest enterprise to incorporate art and large-scale sculpture in its public spaces. Among its virtues is a welcome sense of coherence and focus: to offer a broad spectrum of modern artistic practice with examples by major established individuals along with lesser known emerging figures and in particular works by local and regional artists.

This multi-million dollar effort follows in a long tradition of sculpture parks and art programs that originated in museums, but in recent years has expanded to other municipal spaces and sponsoring entities. We all know of corporate headquarters, large urban rail stations (Baltimore), airport approaches (Denver), or city plazas (Philadelphia) prominently displaying monumental sculpture on their grounds. Single objects naturally stand near museum entrances (Boston, Portland, Maine, and Portland, Oregon), and often are works by recognizable masters.

During the middle decades of the twentieth century, museums added sculpture gardens near their buildings, notable among them being the National Gallery of Art and the Hirshhorn Museum in Washington, the Walker Art Center in Minneapolis, and more recently the Seattle Art Museum, and the Nasher Collection in Dallas. MGM itself was a leader in incorporating examples by major artists into the arena of its flagship resort casino resort, City Center in Las Vegas. Both outside and within the complex are installations by such prominent names as Henry Moore, Maya Lin, James Turrell, Jenny Holzer, and Frank Stella. Outside the major museums in the Washington-Baltimore region, National Harbor displays the most extensive assemblage of large-scale pieces publically accessible in the area. This is good news not just for local patrons but also for visitors from much farther afield.

At the same time that these cultural shifts in the acquisition and presentation of art were taking place were profound changes in the very nature and definition of sculpture itself. Throughout history artists have explored a variety of materials and techniques, as we know, from marble and bronze in ancient times to plaster, wood, steel and synthetics in the modern age. They have carved and cast objects, and by the early twentieth century were using devices of assemblage and construction. Around mid-century sculpture, so to speak, stepped off the pedestal and reached into its surroundings; equally significant, it opened up its core and solid base to activate space with in it.

We see this perhaps most familiarly in the art of Englishman Henry Moore and American Alexander Calder. The latter also took the radical step of introducing motion into his works, thus extending three dimensions into time. The idea of sculpture was no longer inertness but animation and engagement. In the late 1950s and early sixties David Smith most prominently broke apart his totemic figures. With his late Cubist series he created steel constructions that physically stretched into the landscape, thereby framing and enlivening pieces of nature seen nearby. Meanwhile, their machine-polished surfaces actively engaged the surrounding light. Such an approach now transformed the observer from a neutral or passive presence to someone forced into a lively relationship with the object.

Much the same development was concurrently taking place in painting, as images were no longer just contained within the framing edges of the canvas. Artists like Jackson Pollock and Franz Kline were employing bodily gestures in applying paint that seemed to extend beyond the frame, and with Robert Rauschenberg and Jasper Johns painting itself projected into sculptural dimensions. In fact, the category of sculpture now began to blur with painting and even architecture. Louise Nevelson was a good example of a sculptor enlarging one figural element into an entire wall or room. A further development in the sixties saw the rise of earthworks, in which the artist drew or carved in the landscape itself (see Robert Smithson, Walter de Maria). One aspect of this was the notion of site-specific art, where a work might be commissioned for a particular space or setting. Almost all of these approaches are evident in the National Harbor complex. In fact, one may enjoy here the rich variety of innovation present throughout modern art.

The whole architectural project includes at its core the casino, but as well other resort amenities: a theater for concerts, hotel facilities, restaurants, shops and boutiques. Offices and condos are nearby, all to attract visitation and revenue. Into these variously scaled spaces art of different types, sizes, and materials have been situated. In consultation with James Murren, the CEO of MGM, Mark Myers, an art professional with Atlantic Arts based in Annapolis, selected and placed several dozen acquisitions and commissions.

There are a handful of names with international recognition: Bob Dylan, Charles Hinman, Alice Aycock, Grace Hartigan, Larry Poons, Alexander Calder, Robert Rauschenberg, Alma Thomas, and Sam Gilliam. The latter two of course are prominent African-American painters with a local Washington base and exponents of the area’s locus for color-field painting. But also in this group other aspects of modernism are evident. Dylan’s lacy metal grille frames the entrance corridor to the casino itself. Hinman was a pioneer of the shaped canvas, not just in its contoured edges but also in its gently arced surfaces. He makes light seem to bend across them. Aycock plays with repeated metal panels in white, often suggesting rippling waves, as in Whirlpools, an apt title for an unfolding assemblage curving along the roadway entrance to the casino and overlooking the Potomac River.

Grace Hartigan, an important representative of Abstract Expressionism, here moves in her later work to more post-surrealist organic forms referencing Kandinsky and Leger. And Poons, more familiar for his floating ovals of colors, has shifted in recent years to heavy dripped and poured pigments to create a rough, almost sculptural, field of color. Calder we also know best for his three-dimensional mobiles and stabiles, though he extensively produced related works on paper often depicting discs of bright primary colors amidst swirling lines. His lithograph of Sunsuggests cosmic bodies fixed in space.

Rauschenberg during the late 1950s and early sixties undertook a radical new approach to art that contradicted the previous dominance of Abstract Expressionism. He reintroduced everyday subject matter into his work, and drew on the traditions of synthetic cubism from the early twentieth century along with the arbitrary juxtaposition of images promoted by Dada and Surrealism. This resulted in a series he called Combines, which brought together different visual sources in constructed assemblages. In so doing, he helped break down the boundaries between painting, photography, silk screening, and sculpture. This approach became the foundation of all his later work. His two prints in the ROCI series, an abbreviation for Rauschenberg Overseas Cultural Interchange, resulted from a visit to Russia as part of a decade-long international tour to numerous countries to promote artistic conversation among cultures. At each stop he produced work that incorporated local references and indigenous visual traditions.

In turn, Sam Gilliam’s art is perhaps most familiarly known for his stained and draped canvases, though here he has produced a sequence of framed abstract paintings with strong patches of color and pigment. In fact, one of the pleasures in this art selection is the presence of more unexpected examples from an artist’s career or style. Gilliam’s fellow Washington painter, Alma Thomas, also concentrated on stained color canvases. Her usual practice was to begin a composition in watercolor, and then proceed to a larger scale. By exploiting acrylic, a water-based paint, she was able to translate the radiant transparency of the preliminary washes into her large luminous pieces. As an aside, her Study for “Azaleas Sway in the Breeze” makes a felicitous comparison to other color studies like Chul Ahn’s The Wells, Elizabeth Kendall’s Cloud Pool, Cynthia Bickley’s Untitled, and especially Kenneth Young’s Spring Rain. Such internal connections make pleasant discoveries in experiencing the collection.

A kaleidoscope of contemporary photography in the National Harbor gathering adds another layer of richness to the whole. But it is the monumental works placed inside and out that are especially arresting. While the contrasts of materials, techniques, and scale draw attention, it is the rightness of siting in many instances that is most satisfying. Two wall installations in particular command attention. Margaret Boozer has created a large map of the local Potomac region, carved in red clay, covering the wall behind the reception desk. And extending across another long corridor, Katherine Mann painted several large panels, first in the studio and then hung together as a mural, on which she has added new layers of paint and collage. She has called it The Forest, an abstract panoramic landscape with an irregular silhouette and patterns of dense colors.

Kendall’s Cloud Pool appropriately floats overhead, a massing of glass and porcelain pieces, suspended from the ceiling in the retail promenade. Controlled color lighting plays through it to the white terrazzo floor below. Even more fitting, in the center of the casino lobby is the witty Cash Fighting by Liao Yibai. Two large sheets of polished steel in the shape of currency bills flare upward, with two figures stepping out to fight one another. It provokes a clever play between the literal and abstract form.

Outdoors, John Dreyfuss had the commission to set a grouping of half a dozen polished bronzes on the west terrace, with a view overlooking the Potomac River. One of the most dynamic works in sleek metal is John Safer’s Unity, consisting of three spiraling ribbons of stainless steel and occupying the automobile approach at the hotel entrance to the building. They are the distant descendants of Brancusi’s famous Endless Column in Romania, reaching heavenward, but these are at once machine-like and organic. The precision of design and execution moves beyond Brancusi to embody the high-tech aesthetic of our new century.

If the casino’s call is to excite, and the theater’s to entertain, the art aims to enrich and elevate our spirits.